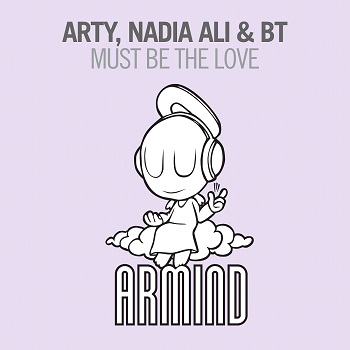 After the huge success of ‘Open Space’ and his genre-busting remix of Zedd’s ‘Spectrum’, ARTY is back. This time he’s accompanied by two legends of the dance floor as he teams up with US production icon BT – he’s produced for Sting, Britney, Tori Amos and Madonna to name a few – as well as one of the most sought after vocalists in EDM, Nadia Ali, for his latest offering ‘Must Be The Love’.
With the unmistakable vocals of Ali oozing throughout the track, ‘Must Be The Love’ sees ARTY and BT pull out all the stops to concoct a masterpiece in euphoric progressive house that is as shiver-inducing as it is subtly brilliant. Beautifully crafted, this is anything but ‘EDM by numbers; rather a master class in creating a track that’s as enchanting and full of energy coming through headphones as it is out of the speaker systems of the best clubs in the world. The trance-inspired break leaves you literally hanging for the drop which, when it comes, is absolutely exquisite.
Due for release on Armada Records, ARTY, BT & Nadia Ali will be available exclusively on www.beatport.com on September 17th.

I am very excited to share with you the first single from my forthcoming #EDM album on @Armadamusic. This song, a collaboration with Arty and Nadia, began several years ago in demo form when I emailed a rough track to Nadia. After several months of riffing back and forth on lyrical notes and counterpoint lines, I began the lengthy and arduous task of comping together a meaningful and poignant vocal. I often compare this process to pointillism in art. It takes an extraordinary amount of time, but in the end when it's worth it, it's well worth it.

This track then sat on my proverbial studio shelf for about 18months. During this time, one of the myriad of pieces I was composing was a 6/4 64 bpm orchestral composition that had these protracted movements of cello, vibraphone, metalaphone and handbells. It occurred to me, somewhere I think I have a vocal, in a related key and tempo / signature. I dug around on the server and bingo...dorian it was. Nadia's vocal was a near perfect fit and worked amazingly with some of the orchestral and small instrument (TBU style) orchestration.

Enter...Arty. At this time Arty and I had been talking over DM on Twitter about collaborating on a track together. I sent him both the vocal and orchestral things we'd written and he sent me back beautiful percolating and driving percussion, an incredible undulating tresillo ostinato synth line and a beautiful drop.

This part of the process began to culminate during this summer. As I was beginning to dig in to Trevor Wisharts brilliant new version of CDP. For those of you that don't know, CDP is a command based DSP programing language that calls opcodes and commands in either OSX terminal or DOS. I've been using it in both for many years but this track is the first time I've really gotten my hands dirty so to speak, on something as prominent as a vocal and Nadia's provided the perfect clay. After about 100+ hours of pure sound design, spectral blurring..distort repeating and the epic PSOW and modify brassage, you can hear the results of these sonic transformations throughout "Must be the Love", most notably at the very beginning. I for one have never heard anything like this.

Thanks for listening.
Always,
_BT"