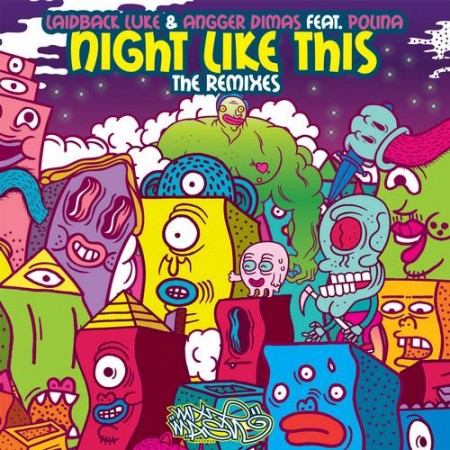 Since it's triumph in the clubs, summer festivals and all over the on-line and off-line worlds, "Night Like This" is ready for the next phase. This absolute hit from Laidback Luke and Angger Dimas featuring Polina now got 4 unbelievably high-energy remixes. Who's is responsible this time? Non other than the latest EDM wonder Dyro, funky edges master Uberjakd, a surprising collaboration of Vandalism and Mr. Fluff, and a hit-shef Sneaker Fox!

The media has been paying close attention to the shockwaves the only 20 year old Dyro is sending out, with a swathe of EDM blogs marking him as one to watch in 2012. And he already made his loud statements with the lagerly popular "Top Of The World" and his huge remix of Dada Life's “Feed The Dada” and not to forget his Monster Talk (produced with Loopers) and Klav tracks recently released on Mixmash. Heavily  supported by the likes of Hardwell, David Guetta, Afrojack and Fedde Le Grand it looks clear that Dyro will not wait long till his name goes viral. Dyro's remix on "Night Like This" is hooked on a new fresh melody with clean, catchy chords spiced with the strong electro synths, dub-step elements and crowned with a heart-beat accelerating drop. No doubt, it's a 100% right track to shake the crowd.

Being one of the strongest young talents in the Australian dance community, Uberjakd calls himself responsible for many a broken curfew, blistered heel and disco hangover. Been graduated to the EDM world after spinning his wares alongside Calvin Harris and Laidback Luke on the main stage of Creamfields (Adelaide) 2011, Uberjakd made his first and best impression followed up by the outstanding remix of Bingo Players (‘Rattle’). Now his upcoming "Night Like This' remix is typical Uberjakd style: everything from drums, to ping-pong sounds surprisingly fitting in with the dark yet funky progressions of the remix.

The third remix is delivered by the Australian electro sensation Vandalism and Kuala Lumpur based upriser Mr. Fluff. This exotic collaboration brought us some juicy electro fusion with the sharp beats, low base enriched drop and unexpectedly distorted synths.
Highly supported by international DJs such as David Guetta, Laidback Luke, Afrojack and many more Mr. Fluff has already gained a shiny “Producer of The Year” award by Choons Awards with his club banger “Caution”. While Vandalism is dominating Australian nightlife, remixing the likes of Katy Perry (Teenage Dream), Aviici (Jailbait), Angger Dimas (Duck Army) and being responsible for the top-shelf singles, like Got It, Rockin, Throw Your Hands Up, Vegas and more.

And to round it up nicely we've got Sneaker Fox, the almighty DJ/Producer responsible for the worldwide #1 remix of the smash hit Gotye feat. Kimbra “Somebody I Used To Love”. Now he brought a fresh twist into "The Night Like This" by doing to it whatever he felt like: from the reversed vocals to the stylish progressive piano riffs that would lure into the endless big-room drop.